Stenosis is an abnormal narrowing of a pathway in your body, often in your spinal column or neck. It can be a debilitating condition that leads to weakness and paralysis. Right now, we're witnessing a rare, self-induced case of campaign stenosis that is narrowing Donald Trump's path to the presidency so much that it's almost entirely closed off. And it's only early August.

Elections aren't typically won or lost in August, not before the presidential debates, unforeseen world events, an October Surprise, and who knows what else. But this is a most atypical election year (that's just in from the Keen Sense of the Obvious Bureau), one in which several major newspapers have already endorsed Hillary Clinton over Donald Trump, one in which Trump got virtually no bounce from the Republican National Convention while Clinton got one from the DNC that is lasting well beyond what is normal, hardening from a bounce into a rock solid lead.

Consider this: in the last ten days, major national polls have shown Clinton beating Trump by ten, twelve, even fifteen points. Her average lead right now is around eight points. It's true that summer surveys are far from conclusive, and Trump could still (and probably will) narrow the gap considerably. But the last two presidents, Barack Obama and George W. Bush, never had leads remotely that large. In the last forty years, only Ronald Reagan in 1984 and Bill Clinton in 1992 and 1996 ever enjoyed polling leads this substantial at this point in a presidential campaign.  Reagan went on to win by 18 points, and Clinton won both his races by comfortable margins.

Hillary Clinton, despite unfavorability ratings that would be the worst in history if not for the even worse ones of her even more despised opponent, is poised to win the presidency in a landslide. Yes, a landslide. Not because of those lopsided national polling numbers, but because she is pulling away in states that should be closely contested, and could even capture states the Democrats should have no reasonable hope of winning.

Here's how this election will turn out if Clinton wins the same states Obama did four years ago (interactive maps courtesy of 270towin.com, where you can make your own): 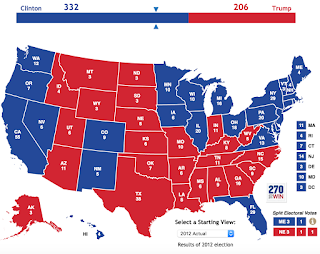 So that means Clinton starts with a presumed Electoral College advantage of 332 to 206, if she just holds on to all 27 of Obama's blue states, and Trump wins all 24 red ones Mitt Romney carried (50 states, plus the District of Columbia). 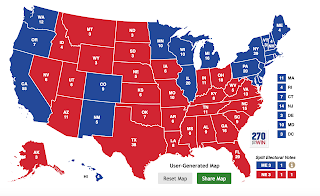 Here's where Trump's electoral stenosis comes in. Recent polls in those battleground states show Clinton winning Pennsylvania by between 9 and 11 points. If not for its history, that would make it a Clinton shoo-in, not a swing state. She's beating Trump in Colorado by from 8 to 13 points, and in Virginia by 7 to 12. In fact, the Clinton campaign is shifting resources from those two states, so confident is it now of victory there. And the shift to Clinton goes on: WBUR has her beating Trump by 17 in New Hampshire. The last two polls in Michigan put Clinton up by 9 and 10. These are no longer battlegrounds; they are killing fields.

Ohio, Florida, Nevada, North Carolina and Iowa remain close, and could still go either way. But Clinton could lose all of those and still win 273-265 as long as she carries Pennsylvania, Virginia, Colorado and New Hampshire, where, we've just noted, she has commanding leads.

A more likely scenario, in fact, is that Clinton not only sweeps most, if not all, of the swing states, but pulls off upset victories in historically Republican states, conservative strongholds like Utah and Georgia, and purplish places like Arizona. Clinton should not be competitive in Utah and Georgia, and Arizona should be relatively safe for Trump. But this is Donald Trump we're talking about. He is loathed by many conservative Republicans in Utah and Colorado, in particular, and his anti-Muslim rhetoric repulses Mormons throughout the Intermountain West, while his anti-illegal immigration vitriol is galvanizing the Latino vote in Arizona. So Arizona, which no Democrat has won since Bill Clinton in 1996, is a dead heat. So is Georgia, where the two most recent polls actually show Clinton ahead - even though no Democrat has carried the Peach State since her husband in 1992. And Utah? Tougher to predict, thanks to a dearth of polling data, but Libertarian Gary Johnson is running strong there, and with Mormon conservative ex-CIA agent Evan McMullin entering the race as an independent wild card, a Clinton victory there over Trump in a splintered field is certainly not out of the question.

So, one last map: If Clinton were to run the table in the battlegrounds, and tip just a few typically red states into her column, the country would look like this: 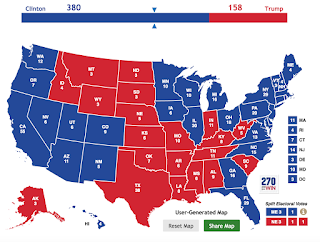 That's 31 states for Clinton, only 20 for Trump, and a 380-158 Electoral College landslide, the biggest since George H.W. Bush swamped Michael Dukakis in 1988.

Of course, this election could also end in a 269-269 tie, if things broke just right, which could leave us with President Donald Trump and Vice President Tim Kaine - but that's a scenario to be explained in another column - and only if if Trump can somehow stop dealing body blows to his own candidacy.