As American As Apple Pie

Yesterday (March 8, 2017) I had the high honor and privilege of delivering the keynote address as 1084 immigrants from 89 countries were sworn in as U.S. citizens at the Paramount Theater in Oakland. The local office of the Bureau of Citizenship and Immigration Services is so overwhelmed with applications for citizenship that it's holding these mass swearing-in events at least once a month, sometimes twice. The number of applications has doubled since Donald Trump became president. They've been asking me for years to be the guest speaker, since the days of the old INS. Something—breaking news, gridlocked traffic, once a flat tire—always conspired to keep me from doing it. Some of my media colleagues have had this honor, as have three members of President Obama's cabinet, and last month, California's Secretary of State. This time, finally, it was my turn. It was a powerful, emotional moment: watching each new citizen rise as his or her country of origin was called, hearing almost 1100 people swear allegiance to their new nation in unison, seeing the tears of joy, pride and yes, relief, stream down the faces of not only the new citizens but their family members as well. 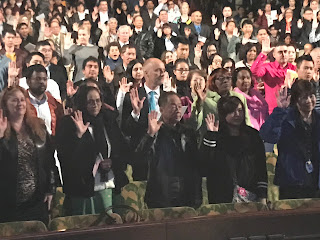 Many of them, and some of my friends and family, have asked for a copy of my remarks. The rules of the engagement are simple: keep it brief, no more than five minutes, and please refrain from overtly political comments. Given the current climate, and with a handful of federal immigration officials presiding, now members of the Trump administration, that assignment was, as you might expect, somewhat fraught with peril. Here is what I said:


Good morning, my fellow Americans.
That has a nice ring to it, doesn’t it? Take a moment. Close your eyes. See how it feels inside as you say to yourself, I am an American.
America began as a dream. A dream that came true for the very first immigrants to these shores, and that has been coming true across the centuries since. You had the same dream as Myles Standish, as Alexander Hamilton, as the mother of Donald Trump, whether you had it in Taipei, Tel Aviv or Trinidad. Yes, the same dream as Alexander Hamilton. Perhaps one day they’ll make a hiphop musical about you. Maybe you’ll create one of your own. And if the election of our new president doesn’t prove that any notion, no matter how far-fetched, can come to fruition in America, well, then, nothing does.
Today, this morning, right now, your dream has come true.
Most Americans, believe it or not, never had that dream. They take being an American for granted. They didn’t save up money for years, work so hard every day with the hope that someday, if the stars align and the fates are willing, they might get to fulfill their deepest desire and find a way across the oceans, and get to live where they wish to live, and be who they wish to be, and lead a life they could only imagine for so long. They didn’t have to study to become an American. They just opened their eyes and started crying, and boom, another baby citizen is born.
I work in a newsroom full of well-educated, well-informed citizens. People who are immersed every day in the gritty minutiae of politics and civic life. Once, I gave them the test you had to take to become a citizen. You know how many of them passed it? One. And she was originally from Canada, so she had taken it before.
My point is, you are incredible people. Brave, brilliant, special people, who worked their tails off to make that dream come true.
My mother is a first generation American. Her grandfather left a small town in Russia, in 1911, somehow made his way to Liverpool, England, and crossed the Atlantic on the Lusitania—a ship that was sunk by German torpedoes on a subsequent crossing—and landed in Boston. He worked for ten long years to save enough money to send for his wife and five children, after World War One. Ten years without his kids. Ten years without their father! One of those children grew up to be my grandmother. She was raised in a town so small that its name translates to “junction of the dusty roads.”
My father’s grandparents came here from, we believe, Latvia. My parents were not only the first in their family to go to college; they were the first to get beyond the eighth grade! Between them, they had six children, and raised four stepchildren too, all of whom have gone on to college—and most to graduate school—and all have had successful professional careers, and made lives for themselves, and most have children of their own, and are proud, vital, contributing members of American society.
That is how America was built. It is how we became the great nation we are—one man, one woman, having a dream, and then working to make it come true. That is the founding spirit of this society: anyone can do anything, anyone can be anything, if they are willing to put in the sweat and grit and energy to make it happen. Whether you want to open a corner store, or start a great company, or teach little children, or be the very best employee or make the best pozole or lumpia or siu mai anyone has ever tasted, in America, you can do it.
(By the way, if you DO make the best pozole or lumpia or siu mai, please come see me afterwards).
You have taken the first step. You are now as American as apple pie—which, by the way, comes from England, and the Netherlands. You are as American as a hamburger—which originated in Germany. You are as American as a slice of pizza—and I don’t think I have to tell you which country invented that.
In this time when some in this country talk of building walls to keep others out, of barring some immigrants because of their religion, of closing off the pathways to the dream you’ve just made come true, I can only invite them to come stand where I am standing, look out across this theater, and see what I see: the stuff dreams are made of. American stuff. The very fabric of the red, white and blue we just saluted. I salute each and every one of you. Congratulations to you all, and thank you, for making my country, the place where I was so blessed to be born, even better and stronger, than I could ever dream.