The Next President Of The United States...

Reading the last dregs of the 2020 tea leaves, late Monday night, November 2:
My track record took a severe hit four years ago when, like so many supposedly intelligent and well-informed pundits, I predicted that Hillary Clinton would defeat Donald Trump and win the presidency. Unlike most others, I did lay out a possible Trump path to victory, but I didn't think he would actually take it. I also missed on two U.S. Senate seats. Despite this stain on my reputation, I'm back to make a fool of myself in a public forum once again. Many of my peers gave up on making predictions after 2016, but it takes more than one badly blown call to retire my crystal ball.
(Just to refresh your memory, I did bounce back and get both of this year's presidential nominees right, correctly predicting before the primaries that Joe Biden and Donald Trump would square off in November—and Biden was hardly the trendy pick. In fact, I've never missed on the Republican nominee, going 12-for-12, dating back to 1972. I'm 10-for-12 on picking the Democrat, but now I'm only 9-for-12 on calling the winner of the general election, a no-longer-so-robust batting average of .750. In baseball, that would make you a superstar, but in politics, it just makes you wrong.)
So who's going to win tomorrow?
Well, here's one scenario: the polls are off again, underestimating the strength of President Trump's support. His massive late rallies energize his base, he matches the record early turnout by Democrats with an overwhelming mobilization on Election Day, and he just barely hangs on to the key swing states of Florida, North Carolina and Ohio, while fending off the Blue Charge in Texas, Georgia, Arizona and Iowa. There does appear to be some polling momentum in the president's favor in Pennsylvania, and the campaigns know it, which is why we saw both tickets descend on the Keystone State again in the campaign's final hours. So let's say Biden locks up Wisconsin and Michigan, but loses his birth state of Pennsylvania, where enough rural white voters stick with Trump to give him a second term, with just 279 electoral votes, despite losing the popular vote to Biden again. Here's what that map would look like: 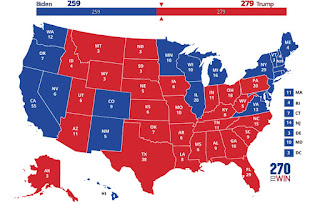 This is probably the best case scenario for the president.
But I see no way Trump wins the popular vote, despite the insistent predictions of the many ardent Trumpkins in my Twitter feed (as USC political scientist Bob Shrum told me today, "The Twitterverse is not the voting universe. The Twitterverse was not the voting universe in the Democratic primaries. If you followed Twitter, you would have thought Biden had no chance.")
So Trump could make history again, becoming the only president to be impeached and win re-election, and the first to lose the popular vote twice but still win.
That's not what the polls suggest will happen, though. And yes, I know: the public polls are crap, They were wrong in 2016 and they could be just as wrong again. But here's the thing: the polls would have to be more than twice as wrong to blow it in 2020. I mean, colossally off the mark, the worst since 1948, and maybe even worse than that.
Let's examine that for a second. Four years ago, the average of the final, credible, reputable national polls gave Hillary Clinton a three to four point lead over Donald Trump. In fact, she won the popular vote by about two percent, which is pretty darn close. What she didn't do was carry Wisconsin, Michigan and Pennsylvania, because of apathy among Black and progressive Democrats, in particular. The failure of maybe 100,000 of them to vote across Milwaukee, Detroit and Philadelphia gave Trump razor-thin margins in those three states, and the presidency. The polls in those states overestimated her turnout and underestimated his, in some cases because of underweighting of the rural white voters who carried Trump to victory. But even if that happened again, even if the same polls were off by just as much, it wouldn't be enough for Trump to overtake Biden.
Biden's lead has shrunk a bit in the closing 48 hours of this race, but it's still in the 7-8 point range, nationally. If the polls are as wrong as last time, he still wins the popular vote by about five points. If they're wrong in the direction they were in 2012, when they didn't foresee the massive turnout for Barack Obama, he wins by ten or twelve. But as we know all too well from both 2000 and 2016, winning the national popular vote, even by millions of votes, doesn't guarantee you the keys to the White House (does the White House actually have keys? If it does, the Secret Service probably carries them for its occupant).
So what will happen in the key swing states? Biden has narrow leads in many of them, but seems to be fading in Iowa, and Trump is closing the gap in Pennsylvania, Florida, Arizona and North Carolina. Biden could run the table and win them all, achieving an historic landslide no one thought possible in this highly polarized era. If he turns Texas and Georgia blue, and flips the states I just mentioned, and maybe Ohio too, he could even achieve a Reaganesque 400+ electoral votes. It would be an historic repudiation of a sitting president, and the country could look as blue as this: 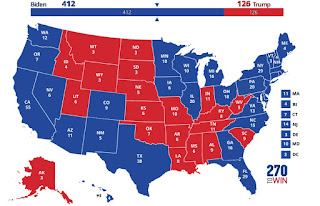 But...no. I do think President Trump has played the closing days as well as he could after running a pretty dreadful campaign for months. The way his followers see it, he beat COVID19, he's on the stump around the clock, he's telling them what they want to hear, and that sure beats Joe Biden wearing a mask, stumbling through uninspired platitudes and holding "rallies" of a hundred socially distant people honking their car horns. I think Trump has tightened this race considerably, against all odds. So here's my bold prediction:
POPULAR VOTE
Joe Biden 50.8%
Donald Trump 45.1%
Those numbers could mean Biden beating Trump by almost ten million votes, far beyond Clinton's two million vote margin in 2016, when about 136 million Americans voted. This time, it looks like we will top 150 million and maybe even approach 160. At 150, that would mean Biden netting more than 76 million votes, to about 67 million for Trump. If Biden's margin is really this large, it is very difficult to imagine Trump still winning the Electoral College, and imagine the uproar if he does.
But I don't think he will. I predict that Trump does hold serve in Florida, Texas, Georgia, Iowa and Ohio. But I think Biden upsets Trump in North Carolina, ekes out a win in Arizona, retakes Wisconsin and Michigan and scores a narrow win in Pennsylvania. That would give Biden 305 electoral votes, turning the tables on Trump's 2016 margin. That would look like this: 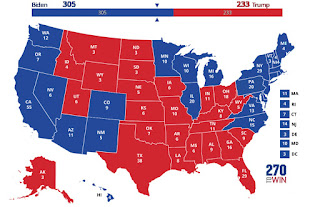 It's also conceivable that Biden wins Florida, which would get him to 334, or that he loses both Arizona and North Carolina and wins with just 279. In that case, Pennsylvania truly ends up being pivotal. But my final call is:
ELECTORAL VOTE
Joe Biden 305
Donald Trump 233
I could be wrong. I was four years ago. Unlike in past years, I have not been on the campaign trail since February, because of the coronavirus pandemic. It's much harder to tell what's going on from my home radio studio in Oakland than it is if I were out following the candidates, as in a normal year. But that's my best guess, and if 2020 has taught us anything, it's that you do what you can, accept what you get, and be grateful for another day.
Oh, one more thing: the Democrats hold the House and retake the Senate. Democrats flip GOP Senate seats in Arizona, Colorado, North Carolina, Maine and one of the two seats in Georgia, and Steve Bullock pulls a surprise in Montana, while the Republicans reclaim Alabama, for a net Democratic gain of five, giving them a 52-48 edge in the new Senate. The GOP hangs on in one of the Georgia races, Iowa, South Carolina, Kentucky, Texas and Alaska.
Tune in Tuesday night (or Wednesday morning, or maybe not until Friday!) and let's see how I, and more importantly, America, did.
Posted by Doug Sovern at 11:19 PM 4 comments: