Tears Of A Clown

"I think California is extremely winnable. I think that there's a real groundswell happening here in California. I've got a lot of little ticklers out there that are indicators to me just how significant our vote count could be here."

That's what Liz Ritchie, Northern California field operations director for Donald Trump's presidential campaign, told me Wednesday about her candidate's chances in the Golden State. Her apparent optimism belies all recent polling data, and the campaign's own activities in California. Hours after Ritchie's confident assertion, a new statewide survey by the Public Policy Institute of California showed Trump's support here cratering to an historic low. Just 28% of likely California voters say they'll vote (or already have voted) for Trump, versus 54% for Hillary Clinton. That means Trump may well deliver the worst performance of any major party presidential nominee in California history. When FDR was re-elected in 1936, he thumped Kansas Governor Alf Landon in the Golden State, 67-32%.

Despite Trump's early bluster about competing for California's mother lode of 55 electoral votes, and his frequent trips here over the late spring and summer to fundraise and campaign, this bluest of blue states has always been safely in Clinton's column. So much so that Clinton's campaign—and Trump's too—has turned California into a giant political gold mine from which to export resources into nine critical states that are still toss-ups. Clinton's Brooklyn brain trust has declared California its national call center. Literally tens of thousands of eager volunteers are staffing dozens of field offices up and down the state, using sophisticated online tools to contact and mobilize voters from Florida to Arizona, from New Hampshire to Nevada. During a visit to the new Oakland office, its director, Katie Hooper, told me that the Northern California volunteers alone are placing more than half a million calls a day. That Get Out The Vote operation will only intensify in the campaign's final days, climaxing with a 96-hour push leading up to the closing of the polls on November 8. 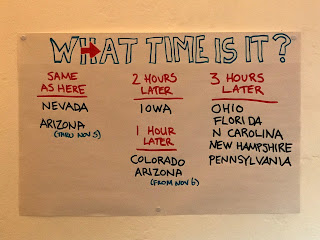 Mind your time zones: a sign on the wall at Hillary Clinton's Oakland field office

Ritchie is running a similar operation for Trump. She claims "hundreds of thousands of volunteers" in California, and says if the national campaign would let her, she could unleash them as a Golden State ground force. "We were kind of gearing up for that, we got prepared for it. It's not like we couldn't do it." But her orders from New York are to send "strike teams" of Californians to Nevada and Arizona, to try to swing those states into Trump's column, and to utilize the same calling technology Clinton is using to reach likely Trump voters in other toss-up states and get them to the polls. "We're going after the battleground states because those are mandatory wins and we don't want to allow them to be neglected in any way." But, she says, "if it looks like we've got a leeway in our battleground states, I'm sure we'll implement" her plan to mobilize her California volunteers in their home state.

It's easy to say Ritchie is putting as brave a face as she can on a looming campaign failure of epic proportions. But she and Trump's other key operatives here—state director Tim Clark, campaign spokesman Jon Cordova—seem genuinely optimistic and enthusiastic about their chances. Do they not read polls? Do they not believe them? Are they in denial?

"We know what we're seeing on the ground," one Trump operative told me. "We have more volunteers than we can handle. There are Trump signs everywhere. He drew huge crowds here and he's still having huge rallies all across the country."

In the last few days, Trump's team has been invoking Harry Truman's upset comeback of 1948, when all the pundits said President Truman was doomed to defeat at the hands of New York Governor Thomas Dewey. But compared to 2016, the polls of 1948 might as well have been carved on stone tablets. Even giving Trump the most generous benefit of the doubt—conceding to him the battleground states where he's either slightly ahead, it's a dead heat, or his deficit is within the margin of polling error (Ohio, Iowa, North Carolina, Arizona, Nevada) and giving him Utah and all of Maine and Nebraska (which award some electoral votes by congressional district)—he still loses the Electoral College to Clinton, 304-234. 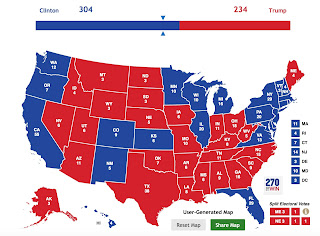 And if Clinton wins North Carolina, Arizona and Nevada, which polls suggest she may well do, to go along with expected victories in Pennsylvania, New Hampshire, Colorado and all-important Florida, her margin of victory balloons to 336-202. If she manages to eke out Ohio and Maine too, it's a 358-180 bloodbath. If she confounds decades of history and upsets Trump in Texas and Utah, her electoral vote tally will top 400 (this is not likely, but it's at least as likely as Trump winning the White House by running the table in the swing states). 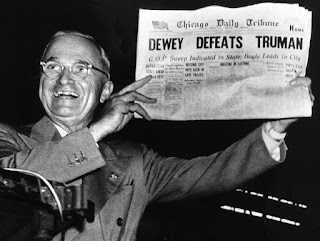 President Harry S Truman exults in his surprise 1948 election, despite the
Chicago Tribune's premature declaration of his political demise

In the last two weeks, Team Trump has sent out at least three emails seeking more California volunteers to staff phone banks and make canvassing runs across the border to Nevada and Arizona. So Ritchie's comments may well be disingenuous. But even taken at face value, large crowds and a minority core of passionate supporters do not necessarily translate into victory at the polls. Just ask Bernie Sanders. When the circus comes to town, lots of people go see the show. That doesn't mean they all want to climb aboard the elephant. The tent seems ready to come crashing down on Donald Trump.