Could Donald Trump really be elected President of the United States today?
Sure. Anything is possible.
The Chicago Cubs could win three straight do-or-die games to capture their first World Series since the Roosevelt administration—and that's Teddy Roosevelt.
The Director of the FBI could turn the presidential race on its head by announcing he's found hundreds of thousands of emails that may incriminate Hillary Clinton on the laptop of a narcissistic sex addict (no, not Trump)—and then, nine days later, pull an Emily Litella and say, "never mind."
Russian hackers could penetrate America's voting machines and switch enough ballots in key swing state precincts to throw the presidency to The Donald.
Okay, that last one hasn't happened—yet (as far as we know)—but barring something similarly outrageous and unforeseen, it seems almost certain that America will indeed elect its first female president by choosing Hillary Rodham Clinton to succeed Barack Obama.
I've been making official presidential predictions since 1972, and it's time for my quadrennial crawl onto the limb of potential public humiliation (I think I've used that line, or a variant, every four years too). I have a great track record, but as we all know, past performance is no guarantee of future results. So just because I've been right nine times out of eleven, and have never missed on predicting the eventual Republican nominee (yes, I picked Trump this year), and have an 80% success rate on the Democratic primary, and got every U.S. Senate race right last time, and nailed Obama's margin of victory in the popular vote, does not mean I'll get any of it right in 2016. This stuff gets harder, and weirder, every year.

U.S. SENATE:
Democrats 50 (including 2 independents who caucus with them)
Republicans 50 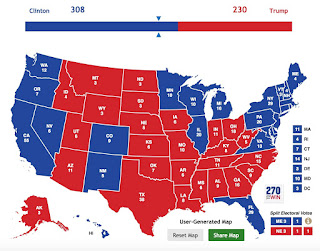 I believe Hillary Clinton will outperform the polls and do better in the popular vote than most of the forecasts suggest. If California's turnout is large enough, she might even exceed 50% (California alone supplied 60% of Barack Obama's margin of victory over Mitt Romney in 2012). I am not as bullish on her chances in a couple of key swing states, Ohio and North Carolina, as some other pundits seem to be, so while I do see her topping 300 in the Electoral College, I am not predicting as wide a margin there as you might see from some of my colleagues. She could hit 323. Her ceiling is as high as 352. But I don't think she gets there.

She doesn't need to, of course. 270 is sufficient, and she'll have plenty to spare, even to withstand a few "faithless electors" when the Electoral College meets in December.

There could be a hidden pool of Trump voters who aren't showing up in the polls. There could be a Trump Effect, with respondents afraid to tell pollsters they're secretly planning to pull the lever for Donald. There could be a huuuge turnout of white men without college degrees who descend on polling places en masse to Make America Great Again. But the early voting data, and the long lines of Latinos, in particular, voting in places like Florida, northern Virginia and Las Vegas, suggest the wind is at Clinton's back, not Trump's, and the momentum he was building since James Comey's October 28th announcement has faded, and reversed field.

A couple of points on the swing states:

OHIO - Trump has consistently led in the polls here. Only a couple—notably, Ipsos, which is an excellent polling firm—have had Clinton ahead, and just barely. Ohio is a reliable bellwether, voting for the presidential winner in every election since 1964. But the demographic changes altering vote patterns in other key states are not happening (yet) in the Buckeye State, which is now older and whiter than its Midwestern neighbors, and this could be the year it falls out of step with the rest of the nation. I spent some time in Ohio during this campaign and outside of Cleveland, it sure felt like Trump country to me. Obama carried the state twice, thanks to very large and late turnouts of African Americans. I don't see as many of those folks going to the polls for Clinton, and there probably aren't enough Latinos in Ohio to make up the difference. I could be wrong, of course, and Hillary could win here, but I think it's Trump's big prize on Election Night.

NORTH CAROLINA - Another tossup state, where African Americans fueled an Obama victory in 2008. But Mitt Romney won it back for the GOP in 2012. Again, the black turnout will be down this time. Can Clinton's superior ground operation put her over the top? Maybe. But my gut tells me that Trump wins this one, too, and incumbent Republican Richard Burr holds off Democratic challenger Deborah Ross in the U.S. Senate race. This one is truly too close to call for me. Clinton could win it, but I'm giving it to Trump.

FLORIDA - A massive surge of anti-Trump Latino voting has been happening in the Sunshine State the last few days. Early voting there shattered records. There could be enough votes for Trump in rural areas and the Panhandle to offset Clinton's big advantage in South Florida, but I think she ekes this one out.

If I'm wrong on any states this time, it will be on one or more of those three. They're the ones in which I have the least confidence. I see Nevada safely in Clinton's column, Iowa going to Trump, Hillary taking New Hampshire, Virginia and Colorado, and Trump surprising many of the pundits and hanging on to Arizona (I could be wrong on that one, too).

In the US Senate race, what once looked like a sure bet that Democrats would win a majority has faded into a tossup over the last fortnight as the presidential race tightened. Republicans have a 54-46 edge right now (including independents Angus King and Bernie Sanders, who caucus with the Democrats). So if Democrats gain four seats and Hillary Clinton is elected president, it'll be a 50-50 tie controlled by the Democrats (Vice President Tim Kaine would provide the tiebreaking vote). If Trump wins the presidency, Democrats need to net five seats for Senate control.

Here's how I see the contested seats going:

So that gives us a 50-50 Senate, with Democrats in control by virtue of Tim Kaine being vice president. making Chuck Schumer of New York the new Senate Majority Leader.

Ross could beat Burr; Kander could upset Blunt. Either of those would give the Democrats outright control. But Ayotte could also come back and hang on against Hassan, potentially giving the GOP a 51-49 edge.

In the House of Representatives, I believe Democrats will fall far short of the 30 seats they need to win to regain control and make Nancy Pelosi Speaker again. I see them flipping 14-18 seats, narrowing the Republican majority but leaving Paul Ryan as Speaker.

There you have it. Tune in this afternoon and tonight to see how wrong I was. And whether Trump or Clinton will be the new Leader of the Free World. Personally, I love Election Day. It's like Christmas morning for me. I can't wait to open our shiny new president.

Our live, wall-to-wall coverage of the election returns begins at 4pm Pacific on KCBS Radio (106.9 fm, 740 am, www.cbssf.com) and will run until at least midnight Pacific. We will bring you national, state and local results, as well as reaction and analysis, live reports from all over the country and California. I will be tweeting like a maniac at @SovernNation, so be sure to follow me for rapid-fire results and in-between-radio-reports analysis, breaking news, and pithy nuggets. Then we'll be back at it starting at 6am Pacific for morning after recrimination and regret. See you there. And don't forget to vote!

Hi Doug! Hey, I have been sending as many vibes as I can over to my fellow Mexicans, Mexican Americans, Latinos, etc as possible. I believe that if we get out the vote, Texas will go BLUE! I hope your map gets more blues as the day goes on.
Best,
Claudia

Thanks! I will be following you with great interest. Hope it IS a Merry Christmas!

As a Democrat I hope you are right but I think you're too optimistic about Clinton's chances - especially in the popular vote (which you have much higher than other predictions). It wouldn't shock me if PA, MI, NC, FL and even CO go red. But as I said, I hope you're right and your track record continues to shine.

Sovern incited the 1968 riots so his cabal could get the booty: UPI June 6, 1992 Sovern took over at Columbia after student protests of 1968 and New York's fiscal problems in the '70s resulted in less financial support for the school, a situation made more dire by recent federal government budget cuts. . . But Columbia will be looking for a new president in a period troubled by criticism for destroying records that were being reviewed for improprieties. Universities in general have been under greater scrutiny for how they charge the government for federally sponsored research.